The Commodore 64 & 128 are notorious for the fact that many games work only on Port 2, while some games require Port 1. Furthermore, since there is only 1 button on a typical joystick, often the fire on the other controller is needed for another action.

The GenAssister™ joystick adapter solves this problem by giving you control of both ports from one joystick! Use a standard Commodore or Atari joystick along with the physical switch to ease swapping ports. Or, plug in a Sega Genesis/MegaDrive controller and take advantage of 8 button madness, including rapid, automatic, and alternate port fire, and a button for UP! If you use the attached cable to plug into a BackBit cartridge, you can change games while lounging back in your easy chair!

Note: Do not plug a Genesis/MegaDrive controller directly into your C64 as this can cause damage. The GenAssister™ safely converts signals to protect your C64.

Comes with this extensive feature set:

Games with special function using “A” on GenAssister:

There are no reviews yet.

Be the first to review “GenAssister™” Cancel reply 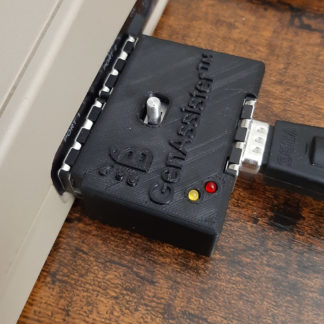